Poppies on a Half Circle 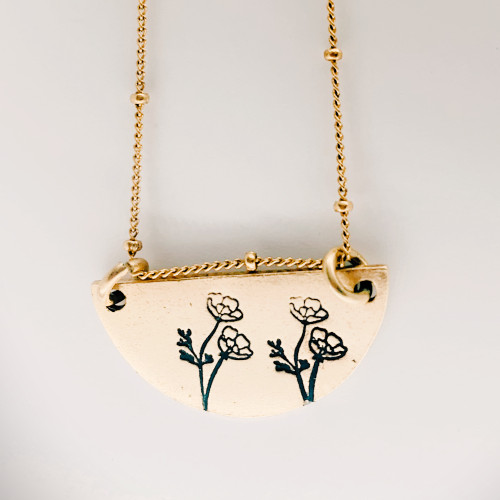 Poppies on a Half Circle

Poppies have long been used as a symbol of sleep, peace, and death: Sleep because the opium extracted from them is a sedative, and death because of the common blood-red color of the red poppy in particular.

The Remembrance Day symbolism of the poppy started with a poem written by a World War I brigade surgeon who was struck by the sight of the red flowers growing between crosses on a ravaged battlefield. He buried his friend killed in action in the makeshift grave on the field. In Flanders Fields was first published in England's Punch magazine in December 1915. Within months, the poem came to symbolize the sacrifices of all who were fighting in the First World War.

Each necklace is hand-stamped on a Pewter Round with an Antique Gold finish.

Under the Same Stars Half Circle

Clovers on a Half Circle

Forget Me Not necklace Antique Gold